Who wants the freakin' worm?

I know the old adage tells us that the early bird gets the worm, but come on now, nobody wants a freakin' worm.  What we really want is an early look at the December issue of the New Century Collector.  So, here it is in all of it's holiday season glory. Go ahead, click the link below and take an early look. Who say's there's no Santa Claus. 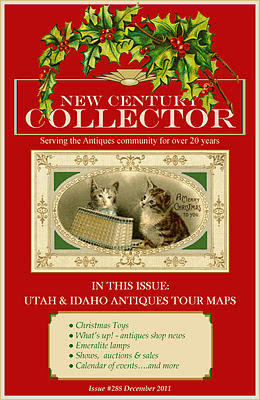 CLICK HERE TO CHECK OUT OUR NEW ISSUE
Posted by Dennis Barker at Monday, November 28, 2011 No comments:

WHAT A FIELD-DAY FOR THE HEAT, A THOUSAND PEOPLE IN THE STREET

When it comes to collecting, my only real passion is for old rock & roll albums, So, in most issues of the New Century Collector I write a column called "For the Record".  Here, I can give my totally unsolicited opinion about music from the 1960's.  The exercise amuses me, and if I can get one or two 20 or 30 somethings to give Pink Floyd a listen, their life will be enriched, there will be slightly more order to a somewhat befuddled universe, and my time will have been better spent than watching game shows.
For the December issue, I had decided to write about "For what it's worth", a Buffalo Springfield protest song released in 1967.  I thought it might be fun to juxtapose what was going in in the Vietnam war protest movement, with the current occupy wall street bunch.  So, I went down to Pioneer park and snooped around a little, then began looking through the photographic record from the 1960's & early 70's, along with all the newly posted coverage of the occupy movement. The fun soon waned.  As I began obsessing about old thoughts and feelings, I discovered a new found empathy with what has now become an international movement for economic equality.
Paul Simon was right, "after changes upon changes, we are more or less the same".  As I fumbled through images, the interceding 40 years melted away, and I began to feel a kinship between the two social movements.  I never did get the article started, but I was inspired into a poor mans Robert Rauschenberg impression.  If any of this piques your interest, here is a link to the music:
FOR WHAT IT'S WORTH, the Buffalo Springfield
and here is the Collage:
AMERICA REAWAKENS: between 1967 and 2011,

little changed in America.  The rich got richer, and the rest of us are still mowing their lawns & fighting their wars. 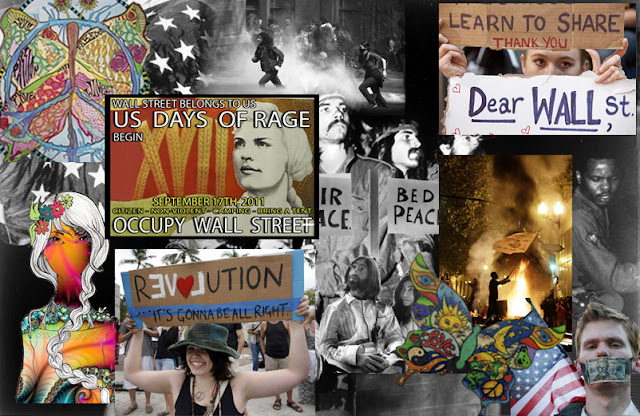 Posted by Dennis Barker at Thursday, November 10, 2011 No comments: