Just got the August Collector from the printer, and we noticed that the obit for our friend Jon Sweet was truncated.  It's just missing a couple of lines, but  thought we would post it here for those who would life to see it.  We will all miss john.

Just click on the picture to see it in a readable size. 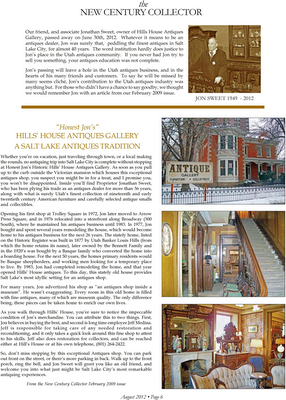 A GIRLS GOTTA KNOW WHERE TO SHOP YOU KNOW!

You're not that girl are you? Everybody's talking about the sale, and you missed it #!?** 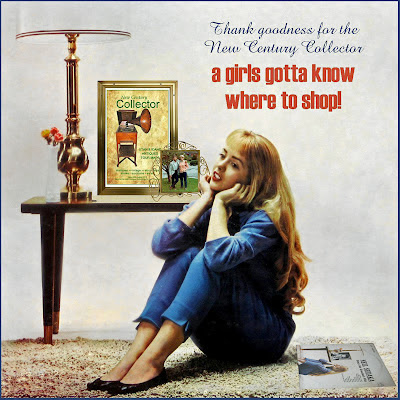 There's only one place to find out about everything that's happening in the Utah antiques and collectibles community.  And, that's the NEW CENTURY COLLECTOR.

Advertising from all the shops, shows, estate sales, flea markets and auctions.  Antiques, collectibles, vintage, retro, consignment or resale, no matter what you like,  the NEW CENTURY COLLECTOR is the only place you'll find it all.

There's ton's of stuff going on during August, so, if you want to take a peek before the latest issue even hits the shops, you know the drill.  Just give a little click on the link below a get the first look at our August issue. 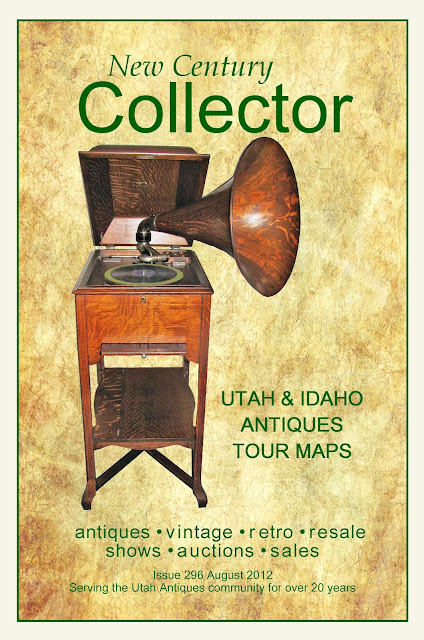 COME ON GIVE IT A LITTLE CLICK.... YOU KNOW YOU WANT TO

Posted by Dennis Barker at Wednesday, July 25, 2012 No comments:

I've never be a good at making choices. I'm more of an "I want it all" kind of guy, but this is going to be a challenge. The rain down in Payson last weekend caused Flea.o.logy to he postponed until this weekend, 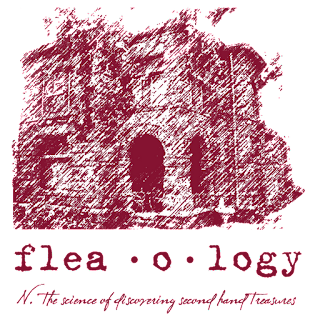 which puts it on top of The Bungalow outdoor Market in Sugarhouse. 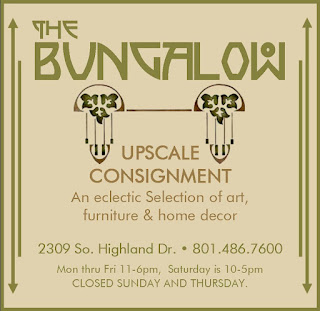 Which is luckily only a hop skip & jump from Abode, which is having their "flea for all" sale.

Looks like it's early to bed & early to rise for me.  Down to Payson, back to Sugarhouse,  a short hop to Abode, and then back in the old truck, to limp on home to finish up the August issue of the New Century Collector. Is this going to be fun, or what?

I'LL SEE THE REST OF YOU CRAZIES OUT THERE
Posted by Dennis Barker at Friday, July 20, 2012 No comments:

DO YOU HAVE YOUR COPY OF THE JULY NEW CENTURY COLLECTOR?

WHAT COULD BE A MORE PERFECT PICTURE THAN A
NICELY FRAMED COPY OF OUR LATEST ISSUE? 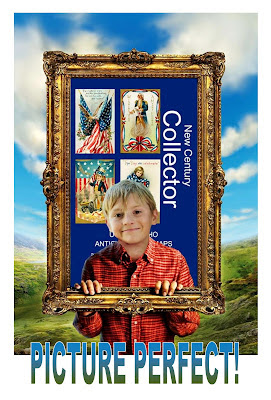 WELL, THAT'S MY GRANDSON ALEC PEEKING OUT OF THE BOTTOM  OF THE FRAME.  NOW THAT IS PERFECT!
Posted by Dennis Barker at Tuesday, July 17, 2012 No comments: 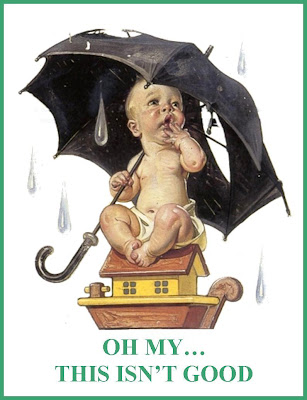 If that was you skulking around Paula Perkins yard at her Payson home this morning, you must have forgotten to get on the Flea.o.logy email list, or "(gasp)" not checked your email lately.  You're usually safe holding an outdoor sale in July, but the rain gods threatened to wash this mornings Flea.o.logy sale down the gutter.  And, since nobody likes the sight of drowning flea's, the flea.o.logists probably did those of us who would stand in the rain to buy a rusty watering can, a favor.

Anyway, no loss.  The Flea.o.logy sale has been rescheduled for next Saturday.  Same flea time, same flea channel.

See you there.
Posted by Dennis Barker at Saturday, July 14, 2012 No comments: 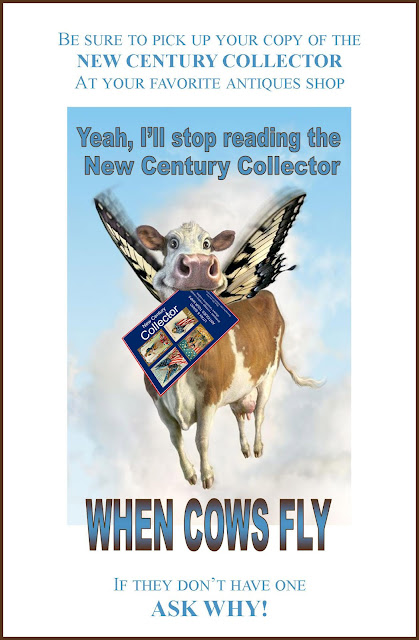 NEED TO TREAT THAT ITCH TO SHOP...... CALL A FLEA-O-LOGIST

HERE ARE OUR FAVORITE FLEA DOCTORS,
PHOTOGRAPHED IN THERE OPERATING CLOTHES;
PAULA, CATHIE & JEN
And, if you've been bitten, you're in luck, because on July 14th, these three world renown flea-o-logists will be opening their Payson clinic and dispensing just the right dose of the medication you need.

However, be warned that you'll have to get up early to have your condition treated on Saturday.  The waiting room is usually packed, and these girls open their doors at a very "undoctorly" 8:00 am. 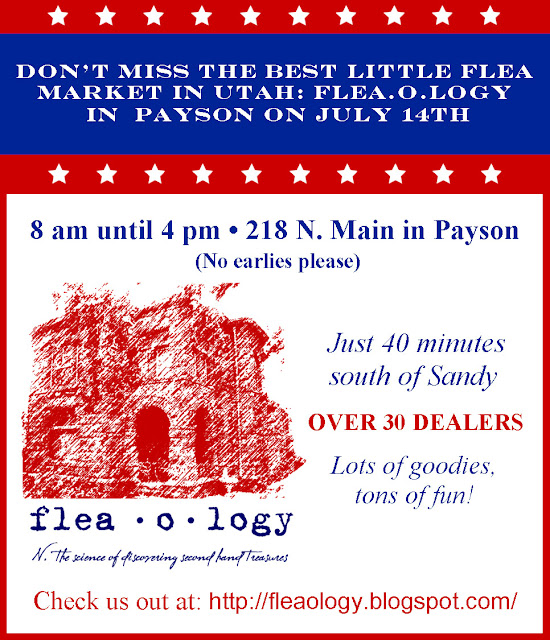 Still, I can't wait.  So for me, it's up at the crack of dawn, and down the road 40 miles to see my favorite county doctors.  I just hope I'm still excited when I see what's left after they operate on my wallet.

Pack up the babies and grab the old ladies...
SEE YOU THERE!
Posted by Dennis Barker at Thursday, July 12, 2012 No comments:

HOT TIME IN THE CITY. SLC URBAN FLEA MARKET.... WHEN WAS SWELTERING SO MUCH FUN

I had barely gotten out of my car before I realized that the pavement was hot enough to bake pizza.  I shrugged it off; July flea markets aren't for little girls. As I walked toward the entrance, the perspiration streamed down my forehead and into my eyes, giving the scene an aura reminiscent of the girls in Star Trek. As I walked through the gate,  heat waves rising from the asphalt appeared to melt the locale into a surrealistic Dali landscape, where I was met by a menagerie of cleverly stenciled vintage luggage, seemingly suspended it the air like a Calder mobile.  I'm going to like this fine. 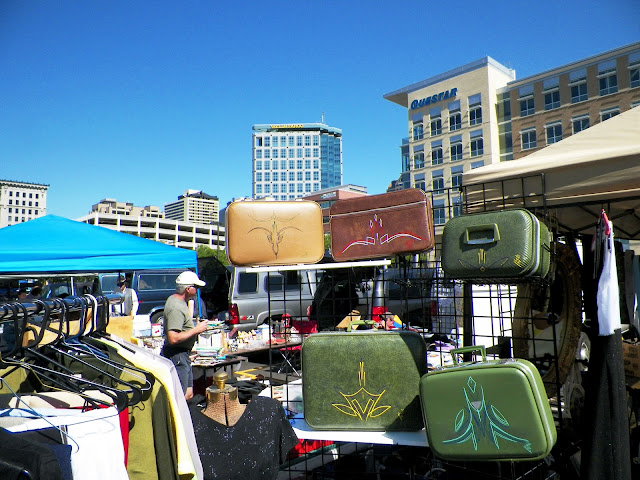 Like I say, it was hot. But, a better adjective might be, it sizzled. Undaunted, the Sunday congregation of dedicated vintage shoppers were already scouring the booths for bargains. 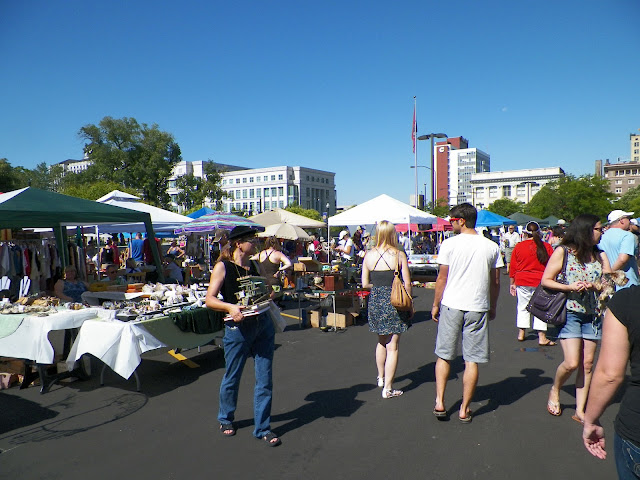 As expected, the July Urban Flea Market had something to arouse the eye of almost everyone.  Antiques, collectibles, vintage, retro, used and otherwise curious objects were cloistered under canopy after canopy, waiting to be restored, reused and re-imagined by the young chic crowd. 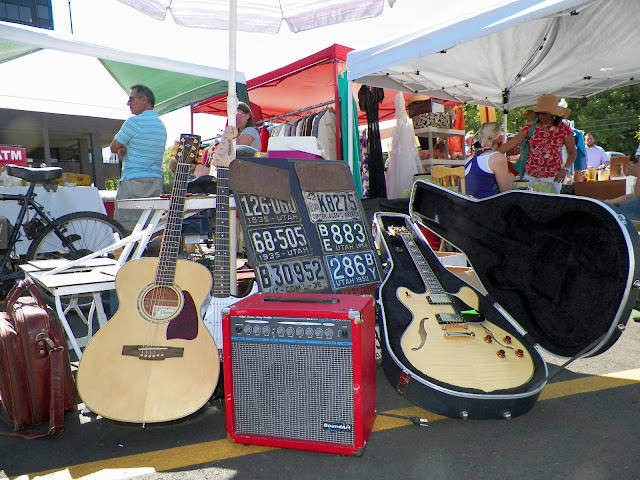 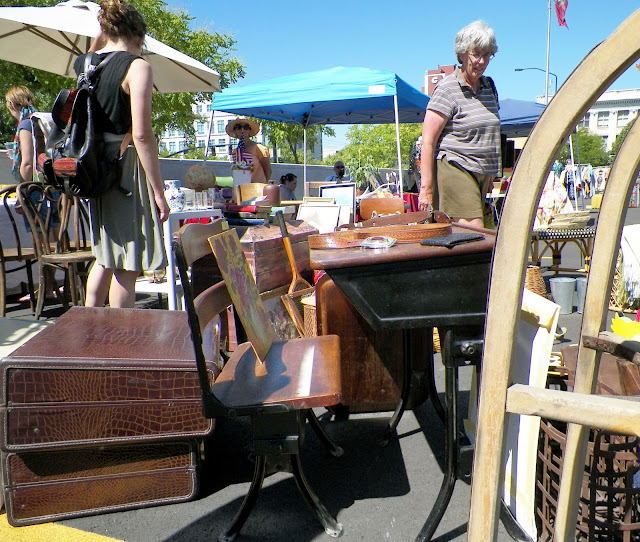 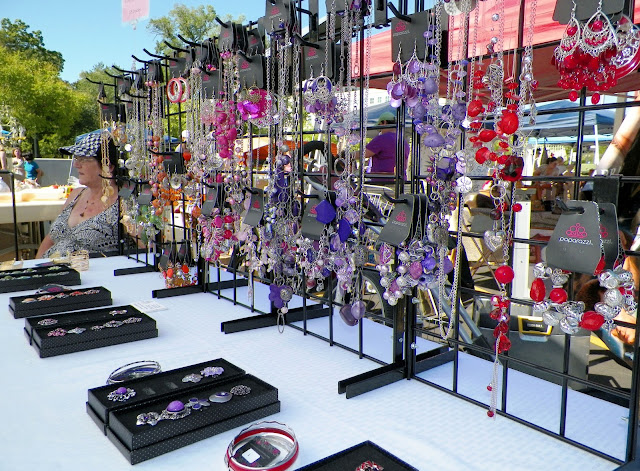 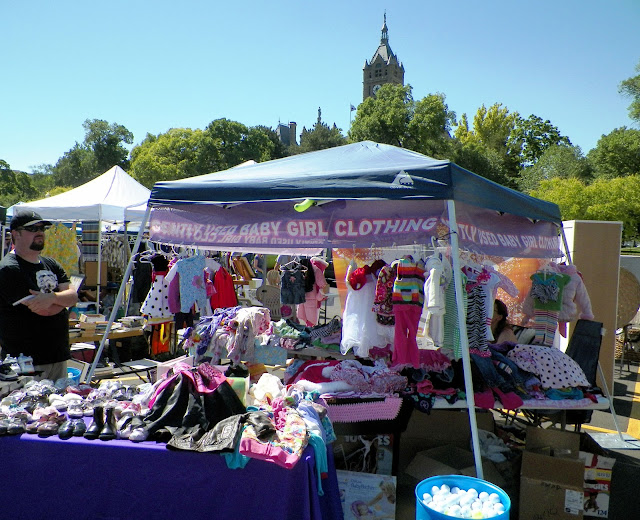 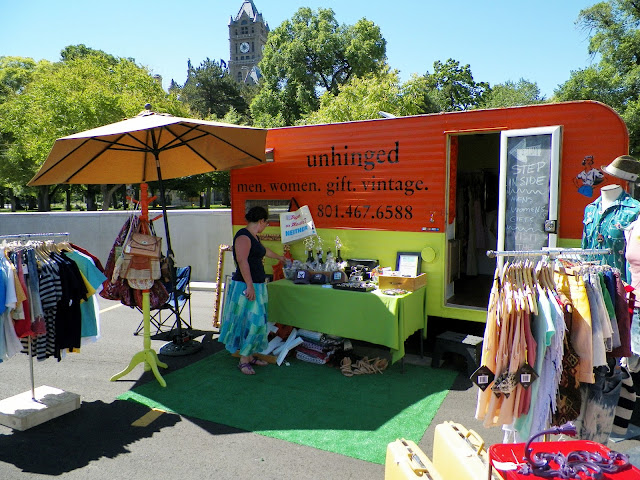 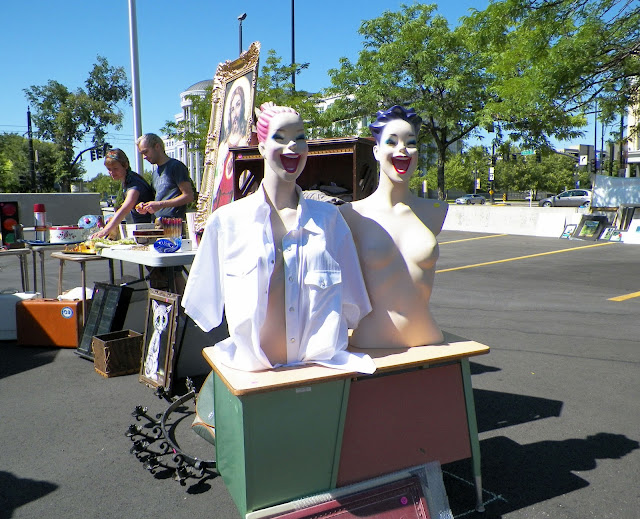 These girls seem to be having a particularly good time. 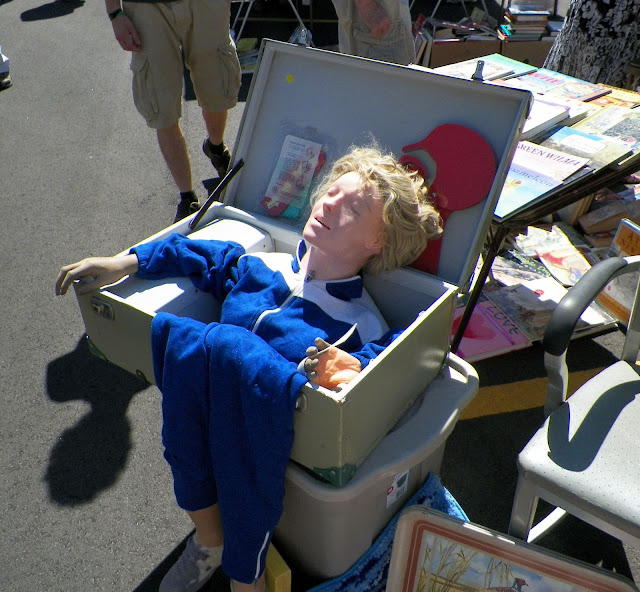 Alas, a summer weather outdoor market isn't for everyone.  This poor lady apparently sat down in a suitcase, where she succumbed to the heat and melted.  Smart shoppers always bring plenty of water, and sunscreen.

Anyway, the warm weather didn't seem to cramp the style of buyers or sellers, and as the afternoon wore on, smiles and bargains were in abundance.  Since there's nothing I like better than a hot time on the town, I'll be back for the August Urban Market, where, short of spontaneous human combustion, I'm sure to have a great day.
Posted by Dennis Barker at Monday, July 09, 2012 No comments: